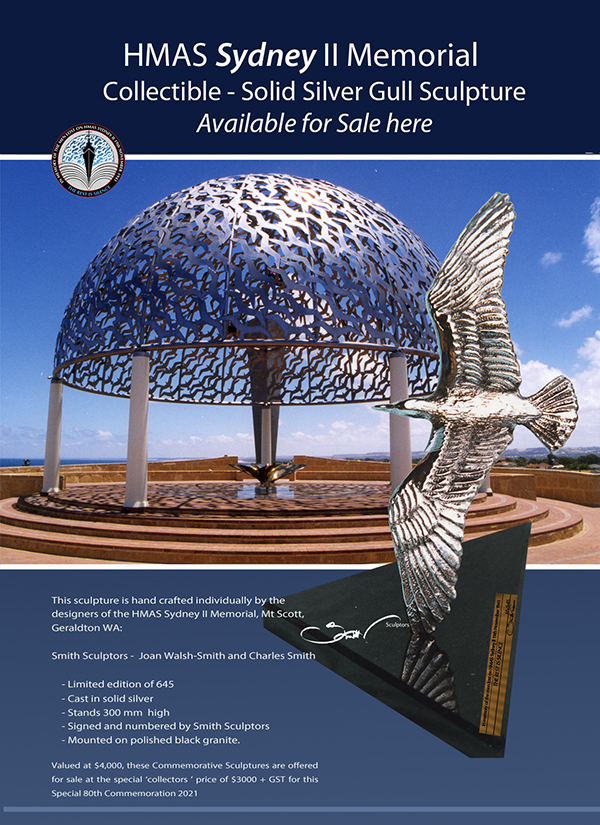 The design of the HMAS Sydney II Memorial Commemorative Silver Gull Sculpture is based upon the design concept for the Dome of the Sanctuary. This is the centerpiece and inspirational heart of the entire complex. It is the starting point for the Memorial concept and  the source and well-spring of the most fundamental basis to the project. It’s validity as a concept is based on the fact that it was directly inspired by the incident which took place at the Dedication of the Memorial site,19th November,1998, when a flock of Silver Gulls swooped over the assembled crowd and flew in formation as  the Flag was raised at  sunset, while the notes of the Last Post rang out in the evening air.

This inspiring moment is encapsulated and frozen in space and time by the formation of a domed roof, sculpted from a flock of 645 stainless steel Silver Gulls,  representing those  who died. Birds are symbolic as spirits of the dead, the soul freed from the body, ascent into Heaven, the ability to enter into a higher state of consciousness. They depict the celestial realm and powers opposing evil. The birds in this context are symbolic  of the Souls of the Departed, expressed in this ethereal way, serene, elemental  spirits, flying free between water and  sky. It is as if at that moment of Dedication, they flew past to give their imprimatur to the Memorial and confirm their transcendence. This incident has created an opportunity to produce a totally unique concept, specific to this Memorial at Mount Scott, individualising it, in a distinctive way for all time.

This cupola of birds, which is 9 meters high, is intended to be uplifting in nature, while providing a sacred space of remembrance and a symbolic link with the men of HMAS Sydney II. It forms a canopy that is a filigree of stainless steel and an open weave Dome. The effect of distilled light reflects the silver sea, creating a sense of disembodiment and peace. Standing in the center of this empty space, one becomes aware of the vastness of the ocean: this ‘ great open grave’. As one’s eyes are drawn upward towards the light, there is a sensation of looking upwards towards the surface of the sea. By day, the beauty of  Geraldton’s blue sky can be glimpsed, filtering light through the sea-silver winged shapes into the Memorial’s inner space, while at night the Cupola, lit by an eternal flame, forms a dome of gold, glowing at the top of Mount Scott. The open filigree structure also lends itself to sound effects, redolent of the sea and the wind, evoking an emotional response in all those who experience this sacred space.  This inner space in itself is highly symbolic and is designed to be evocative of the emptiness left behind by the missing men.

The Silver Gull Sculpture encapsulates the essential symbolic element of the Memorial. Each one is linked to 645 stainless steel gulls forming the Dome of the Sanctuary. The WA gold-flecked black granite base, is a fragment of the blocks from which the Memorial Wall of Remembrance was carved. This sculpture is therefore a small part of the Memorial itself.

Each solid Limited Edition 645 Silver Gull Sculptures are individually hand made to order, and signed and numbered by the creators of the Memorial Joan and Charles Smith which is accompanied by a Certificate of Authenticity.

Order Online At our Secure ESore