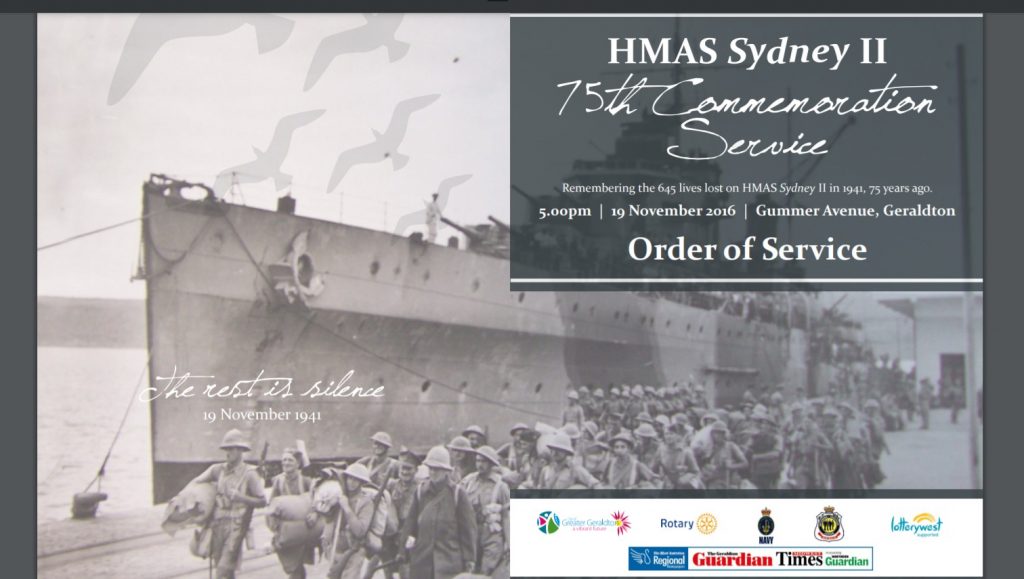 Key Note Speaker – Mrs Bridget Colless, daughter of Captain Joseph Burnett RAN, whose presentation won the hearts and minds of all present by explaining the significance of the Memorial to its creative design and how each element represents a special significance of the memorial to those lost while at the same time collectively creates an experience which memorialises the 645 men lost on the HMAS Sydney II.

“This clearly, in my opinion, and those present pay tribute to the Rotary Club of Geraldton who were the proponents of the entire Memorial and Smith Sculptors who were engaged to create, design and construct the HMAS Sydney II Memorial on Mt. Scott, Geraldton”. – Warden Don Rolston –

The meaningful and complete way each person lost has been identified in full which is a great comfort and respect to all descendants, friends and visitors to the Memorial.

Act as an umbrella to those 645 lost souls although the 645 seagulls are individually delineated their wing tips touch which signified experiences common to all.

Signifies their ship upon which they served with distinction and will stand proud as it oversees the Memorial as a marker that the ship was lost with her crew.

Was a wonderful conclusion to the Memorial which brings closure as it signifies the actual resting place of the 645 men lost with their ship.

“For me the crux of this Memorial is the woman behind me” said Bridget Colless as she went on to describe how she connected with the Waiting Woman, as would have been the case with hundreds of those left behind, not knowing when or if they would see their loved ones again.

Ms Price read a prepared statement on behalf of the Prime Minister, Hon Malcom Turnbull which gave recognition of the significance of the HMAS Sydney II Memorial located at Geraldton on behalf of the nation.

On behalf of the Chief of Navy highlighted the tradition and standards of the Navy which has served the Navy well over the decades.  These traditions were well to the fore on Sydney II, throughout the long and distinguished service in the Australian Navy.  He believed the training and call to duty has and will always be a hallmark of service in the R.A.N.

Ted gave an overview of the dedication and persistent effort of a dedicated few to maintain their goal to influence Government to support the need to ‘find the Sydney’.  After years of effort support and funding was secured to engage the services of world renowned researcher David Mearns who was commissioned to locate the Sydney II.  In March 2008 the search was successful in locating both the Sydney II and Kormoran at a depth of 2468 metre off the coast of Steep Point, Western Australia.

Mayor Van Styn acknowledged the significance of the Memorial and recognised the support of the community and City staff in the care in maintaining such a significant asset.  He singled out the role and effort of the Warden, Don Rolston, for his contribution over the years.

My address to the large gathering was to initially acknowledge distinguished guests followed by describing how the Memorial has become a worldwide attraction.  The creators of the Memorial, Smith Sculptors who were engaged by the Rotary Club of Geraldton to create and construct a memorial which would memorialise the 645 men lost on that fateful day in November 75 years ago.  Visiting the Memorial in itself creates an experience to visitors from around the world, who in turn take that experience and share it with those with whom they meet.  The Geraldton Volunteer Tour Guides are a valuable asset in this regard as they not only tell the story so well portrayed by the five elements of the Memorial they actually create an environment of a shared experience with all its emotion and understanding.  I re-emphasised the world-wide recognition of the HMAS Sydney II Memorial in Geraldton by sharing with the congregation the award bestowed by Trip Advisor.

I assured those present that the high level of recognition both nationally and internationally would be ongoing thus memorialising the 645 lost on the 19 November 1941.  This was intended to bring comfort and compassion to friends and descendants of those lost but also to all those present who by now were emotionally involved in this Commemorative Service.

These Commemorative Services held annually are stand-alone services and are not part of any activities or promotions of other organisations or agencies.