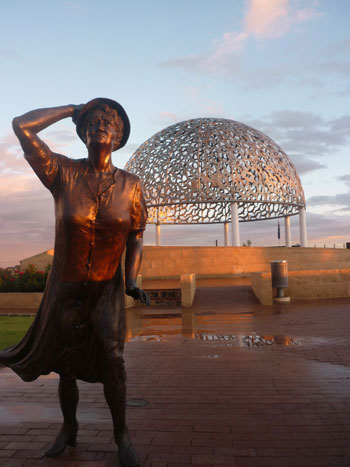 As one moves through the spaces of the Memorial, absorbing the feeling of quietude and contemplation induced by the serenity of the surroundings, one’s eye is drawn towards the horizon, along the pathway towards the sea. At the edge of the cliff stands a figure of a woman. At first glance, this will appear almost real: just another visitor, holding her hat against the sea breeze, her skirt blown back by the prevailing wind. She is anxious, tense; her gaze forever fixed patiently on the horizon. It only becomes apparent as one waits for her to move away, that her stillness is otherworldly, like the young man she is seeking, already in another realm. She is in fact, frozen in time and bronze. She is eternal, all-encompassing; the figure of the waiting woman, grieving for her lost father, husband, brother, son. Through her, we can feel the pain of that loss, the everlasting waiting of those who did and of those who still do.  She stands here, for those who will come to this place, still hoping that the ship will be found, to close this tragic chapter in Australian history. She is also here for those who will at least find comfort in the existence of this sacred site; this place of contemplation which honours and remembers the great sacrifice of those who gave their lives, to make Australia safe and free for the people who live in this Country today.

This concept was evolved as a fitting expression of all the people involved directly in this terrible tragedy. To portray the men from the ship herself, would be very difficult as any particular scene would personalise a single group too much, at the expense of others. All were equally involved and all suffered a similar fate. However, no matter what role these men played, they all had loved ones: wives or mothers, girlfriends, sisters, daughters; someone to mourn them; a woman somewhere who didn’t experience this terrible drama directly, but felt the connection through the eternal pain of loss and emptiness for the long years that have passed. The men of HMAS Sydney II will always be remembered by these women, and the surviving families.

It is to them this Memorial is also dedicated.

Although I have been asked many times if the inspiration for the Waiting Woman sculpture had a single focus or was a particular person, I never confirmed or denied it. I did not wish to take ownership over her, as I believed she belongs to the HMAS Sydney family and the people of Australia. Now, that the Statement of Significance document is being prepared, however, I feel that the time has come to declare the true inspiration and ‘raison d’etre’ for the sculpture as a matter of historical importance.

The inspiration, in fact, emanates from my mother, who is the subject of the sculpture.

During the design development of the Memorial, several people, mostly women, mentioned the idea of doing some representation of the families. Indeed, a ‘mother’ figure seemed to be paramount in most people’s minds. Of great interest to me is the fact that Mitochondrial DNA is passed down through the female line, thus connecting the entire HMAS Sydney family, through the Mother.

The Waiting Woman began to emerge.

The personal inspiration for me as the artist, was a particular piece of family history, which resonated with me down through the years. This was the story of Dan Hogan, my mother’s most beloved brother, who served and was taken prisoner in World War I and lost his life in World War II.

The sense of waiting for news and watching for his return always stayed with me, through the stories I grew up with. The anxious gaze on the Waiting Woman’s face as she stares at the horizon, was set in my mind through the expressions flitting across my mother’s face, whenever she spoke of Dan. Through her, I could also feel the pain of loss by my grandmother, whom I never knew, but whose words were engraved forever, in my young mind:

“ Dear girl, you’ll never know what tears are, until you lose a child……”