Completed – The Pool of Remembrance 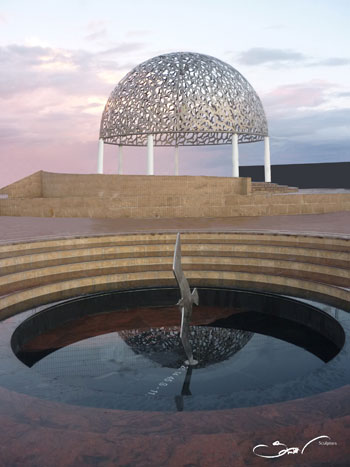 The intention is to complete the original HMAS Sydney II Memorial project by incorporating concepts that were not possible for the 60th Anniversary in 2001 and which could only be implemented upon the discovery of the location of the Sydney. This occurred on 16th March 2008 and the Pool of Remembrance Project was launched.

This would be achieved by the creation of a dignified commemorative area of contemplation and remembrance, complimentary to the existing Memorial precinct, without intruding on any previous symbolic elements. It is a ‘ circle within the circle’ of the original Memorial, which symbolizes the ‘circle of life and death’ and the concept of Eternity and the Infinite.

The centerpiece and heart of this ‘element’ is a Pool of Remembrance. As an appropriate place of commemoration and contemplation, it was decided that no new vertical elements or major dramatic features would be used in the design.

The final concept is a simple, recessed pool, approached by circular terracing symbolically descending ‘down’ into the depths, as it were, evocative of the war grave where the ship now silently rests on the sea floor, 2,500 meters deep, 120 nautical miles off Steep Point, Shire of Shark Bay, WA.

The floor of the pool forms a map, 5 meters across, showing the location of HMAS Sydney II, embedded in coloured granite. A 2-meter high Stainless Steel gull is fixed on wingtip to the exact spot where the Sydney lies, with the co-ordinates radiating out from this, both on the exact bearing towards the wreck site. 26 14 45 S – 111 12 55 E. A circular waterfall pouring out from under the bottom terrace dramatically reinforces the concept of ‘going down into the depths’ and provides the final element all Naval Memorials should have; water!

Inspired by the shadow pattern of the gulls under the Dome of Souls, the lowest terrace circling the Pool is formed in polished black granite, into which is engraved images of 644 Silver Gull shadows, enclosing the pool and the ship. The 645th Sea Gull stands alone on the co-ordinates of the Wreck site in the centre of the Pool.

The polished black granite symbolically links this final terrace to the Wall of Remembrance.

Close by, the Waiting Woman waits no more. Now she watches over her loved ones, eternally at rest. A major  aspect of the idea behind  the Circle of Life and Death, was the concept of the Arms of the Nation welcoming back it’s ‘Lost loved ones’– in effect what the Waiting Woman is waiting for, has now been found. She is no longer ‘alone’.

Her loneliness, sense of loss & waiting has been tempered by the discovery of the ship where her men now lie. By enclosing the Pool of Remembrance, with all its own particular symbolism, we are in effect ‘enclosing’ the Lost Loved Ones in a final embrace of comfort and love- giving them back, as it were, to their families and friends in an ultimate gesture of peace. This is the principle reason why we chose the location for the Pool of Remembrance beside the Waiting Woman.

The circle of life and death embodied in the original design of the National Memorial to HMAS Sydney II, Mount Scott, has now been closed.

“by strange coincidence, upon surveying the site for the Pool of Remembrance, to establish the exact bearing of the wreck, we discovered that the “ Waiting Woman” is gazing exactly along this bearing, although we had no idea where the ship lay when we installed her on site in 2001”

Based on the above and in order to develop the Memorial to its full potential, we recommend the following:

“It is our intention, with the help of the City of Geraldton, to reinstate the sculpture on site, on the same alignment, but with a minor adjustment to coincide with the exact co-ordinates which have been confirmed since the Finding of HMAS Sydney II, in 2008. This would allow us to achieve the absolute accuracy of this positioning, which is of major significance to the entire Memorial and fulfill our original design philosophy, whereby the Waiting Woman is turned, looking towards the spot where the Sydney was lost.

In fact we should note for your interest here, and to reiterate the integrity of this rationale, that although originally, we could not know the position of the Wreck, the Waiting Woman is actually pointed within a fraction of the correct location. This was an amazing occurrence, but has become a story which fascinates the visitor and gives an astounding authenticity to the sculpture. Everything depends on this: her whole expression, in fact, is based on the utter belief of a mother, that she knows where her son is. This is a golden opportunity to complete the story and to unite her visually and emotionally with her lost sons.

In order to emphasise the authenticity thus, of her positioning, we propose inserting into the paving the actual coordinates of the Wreck Site. These would be identical to the stainless steel coordinates on the map in the Pool of Remembrance, and would reinforce the actuality of her gaze.

As a further enhancement to the entire Memorial, utilizing the opportunity while reinstalling the sculpture, we suggest that we move the sculpture one meter back, This subtle adjustment will have several beneficial effects: it engages the sculpture with the Pool of Remembrance in a profound way, emotionally, visually and artistically. The sightline across the Pool, to the Waiting Woman from the South, is thus dramatically enhanced, as it visually engages her silhouette as a poignant gesture against the North West skyline, while ever so slightly integrating her more fully along the axis with the Pool of Remembrance. In this way, without any major dislocation, we maintain the original sense of loss and loneliness expressed by her stance, while gently intensifying the new reality of her proximity to her beloved sons.

This tiny realignment truly ‘closes the circle’ and is strictly in line with our original design philosophy.

We cannot stress enough that we take our artists moral rights to the design, and our responsibilities in respect of this, very seriously.  Accordingly, every tiny aspect of our concept for the HMAS Sydney II Memorial at Geraldton, weighs heavily upon us. Our proposal to make this slight adjustment to the Waiting Woman Sculpture is the result of a considerable effort on our part and entirely consistent with our original design intention. We can assure the Commissioners that the enhancement gained will be of substantial benefit to the entire Memorial.

Observing that the HMAS Sydney Memorial is patently a Naval Memorial, it is of special sensitivity to naval veterans and the families of those lost, so we have consulted with the Naval Association of Australia (NAA) through its National representative on the 5th Element Implementation Committee, Commodore Bob Trotter OAM RAN (Ret’d) FIEAust.  The NAA agrees that our proposal to move the Waiting Woman provides a proper means of emphasizing the sentiment inherent in her relationship with the position of the new Pool of Remembrance and site of the wreck and, accordingly, it fully supports the proposal.”